When I was a child I had an imaginary friend.

She was a girl who looked like me, and her name was Champion Girl (I know, weird, but bear with me!) Champion Girl had a specific purpose. She served to make me better….at anything I was doing. You see, I have always been quite a competitive person, but more so with myself than anyone else. I have always wanted to be the best version of my self that I could be, in everything that I do. That may sound a bit lofty, but it is the truth. And Champion Girl helped fuel this drive in me.

I didn’t tell anyone about her, but she was always there, quietly achieving! When I was running a race on school sports day, she was always my toughest competitor, right there just in front of me, pushing me to run that little bit faster!

When I was scared to put myself out there – like make a speech in front of my class – she was there, giving it a go, even though she was scared too.

She really was a powerful motivator!

As I got older, she just kind of disappeared, as imaginary friends do. I guess I didn’t need her anymore – as I ventured in to my teenage years and early twenties my thoughts and focus were somewhat less masterful! (Although she did make a brief reprisal in my early 20s, after I regretfully told my housemates all about her. Unfortunately for me she became the butt of many jokes.)

So why am I telling you this?

Well, fast forward to December 2016, I am now 35 years old, Mum of 3 young children, and about to attempt to run up a wall that looked to be at least 3 times my height (although that may not be entirely accurate, it is how I remember it!). I am filled with nervous excitement as I watch the guys in front of me run at the wall, leap forward, reach up, and catch the top. They pull themselves up and over the railing above, then run back down the nearby stairs and join the back of the line.

I am at my very first Parkour class, and Champion Girl would be a very appropriate companion for me right now! In the last hour I have played chasey, climbed through trees, jumped over rails and down stairs, and pretended the ground is lava! I have also fallen over, squealed, sworn, grazed my knees, and clumsily run into the more seasoned traceurs as I tried to navigate my way through a series of steps and low walls. My fellow class mates have been nothing but welcoming, encouraging and helpful, and I have had the time of my life!

I decided to finally give Parkour a go after watching my sons participate for the previous 8 months. I found myself itching to try it as I witnessed them jump and climb and leap. The movements were reminiscent of my childhood and I felt a yearning to move that way again. But it wasn’t only the physical aspect that lured me in. I witnessed their confidence in themselves and what they were capable of sky rocket. They were building this awesome relationship with their own bodies and their own capabilities. They were moving in ways that felt natural and good for them, and that left them feeling capable and strong.

According to the Australian Parkour Association, “Parkour is an attitude and training method for movement through any environment at speed. The concept is to overcome all physical and mental obstacles in your path by using your body and mind to run, climb, jump and vault.”

You may have seen the impressive YouTube clips of young guys doing death defying jumps and impossible cat-like movements over roof tops, but that’s not why I am doing Parkour. I mean let’s be real – as much as I’d love to be the next Black Widow, that isn’t in the relms of reality for a single Mum of 3 in her mid thirties! Parkour, for me, is about so much more than the jumps and mesmerising moves.

It is about re-kindling that love of movement – the kind that I did naturally as a child – climbing, running, jumping, rolling. It is also about challenging myself without being in competition with anyone else. It is facing my fears, finding out what my body is capable of, doing things that scare me, finding courage, trying new things, and helping others do the same. All these things can be transferred to other aspects of my life too. Basically it is about being the best version of myself that I can be…just like Champion Girl had pushed me to do all those years ago! Imaginary friends are pretty awesome right!?

So back to that wall run, and it is almost my turn. I take a few deep breaths and run towards the wall. I leap forward, my foot pushes off the wall and I reach up with all my might. My fingers brush the top of the wall, and I drop back to the ground. I didn’t quite make it, but I feel amazing! I had no idea I could get so close! I try again a few more times, and by the end of the class I have run at that wall, and pulled myself up and over at least 5 times! I left class feeling a little bruised and sore, but more importantly I felt courageous and confident, and I had a whole new appreciation for my body. If I’m honest, I felt a little like a super hero, and it felt awesome!

That was 9 months ago, and my love for Parkour has only grown since. I am becoming more confident within myself with each class, and I am physically stronger than I have been in a really, really long time.

At a class recently our instructor had us do wall climb ups. These are hard work for me – from a dead hang, I need to try to pull myself up on to the top of the wall above. Apparently most of the power is supposed to come from my legs, but it feels like they aren’t helping me at all. My arms are burning as I scramble up the wall, red faced, sweating, grazed arms, but determined. There is no time limit, and I’m not competing against anyone else, I’m just trying to get up that wall. I finally make it to the top, and can’t help but smile as I draw the air into my lungs. I did it! It wasn’t pretty or particularly cat-like, but I did it! 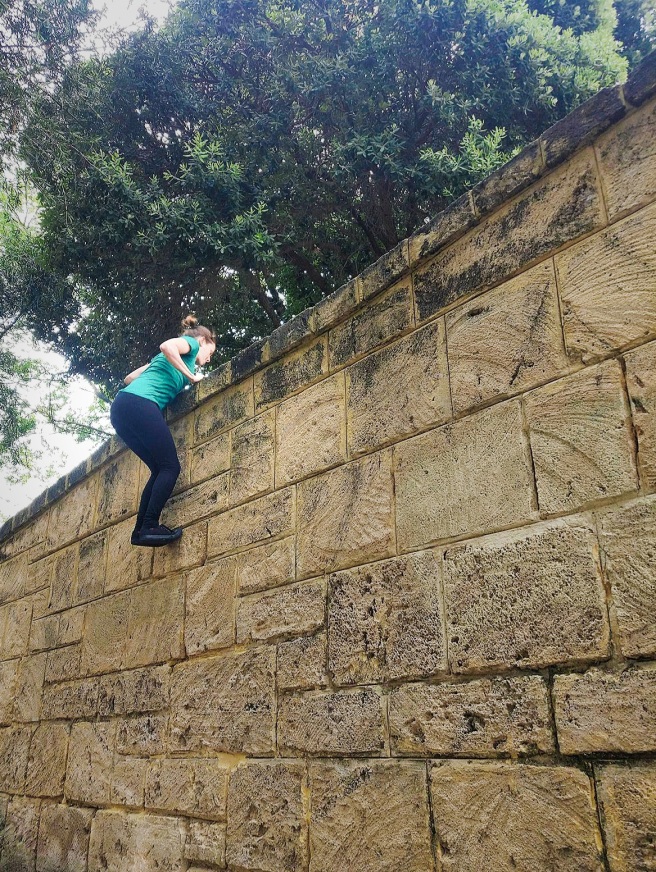 After class one of the Mum’s who had been watching her kids participate came over to me. “I watched you as you climbed up that wall”, she said. “You were trying so hard, and you looked so determined! I was saying to myself ‘you can do it’ and you did! It was awesome! You have inspired me to give the class a go.”

I may have just been scrambling up a wall, but I was thrilled that I had inspired her to give it a go. She hasnt been back….yet. Hopefully I planted a seed, and she will give it a go soon.

I have enjoyed my experience with Parkour so much, that I am working towards becoming an instructor myself. I have a long way to go before I am up there running a class, but I am so excited to share my love of this new found passion for movement and overcoming obstacles – especially with other women and girls here in WA. I think Champion Girl would be proud!

**If you feel like giving Parkour a go, check out Perth Parkour on Facebook or Instagram and register for one of their classes. Absolutely all levels are catered for, and there is always a starting point to suit the individual. You don’t need to be climbing up walls or making big jumps. There are progressions for each and every movement, so no matter your range of movement, or age, or perceived level of ability, you will be given the opportunity to move, challenge yourself and begin to feel more confident in your own body.**